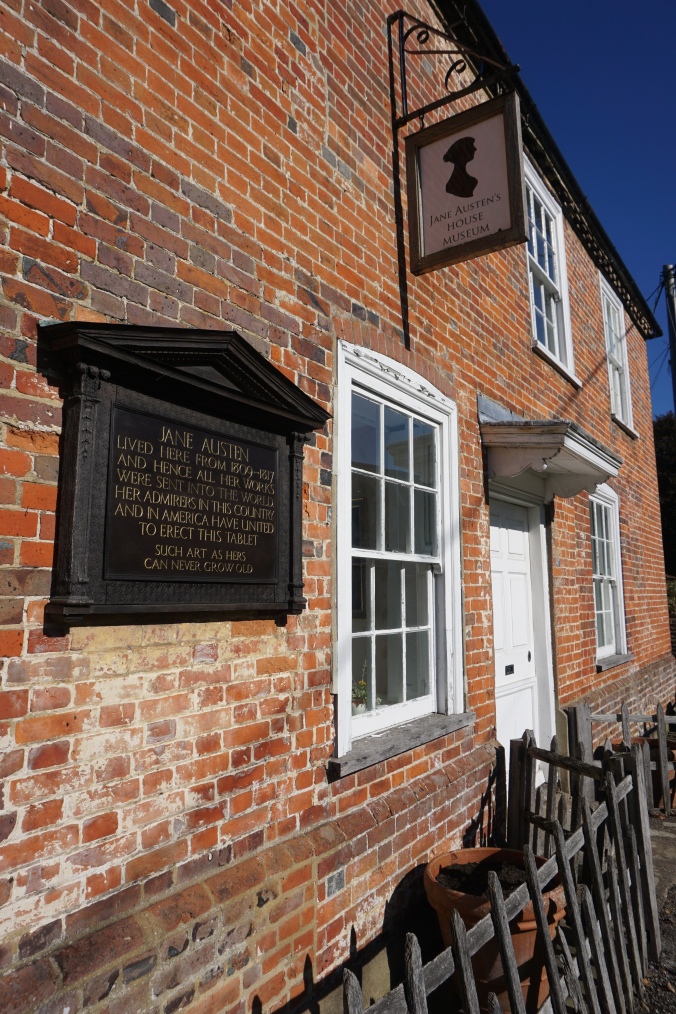 Ever since reading Pride and Prejudice, I have been a huge Jane Austen fan. It’s still my favourite of her novels, but I enjoy all the others too.

Currently, I am living in London, and just absolutely loving life. I recently found out about the Austen house museum, so of course I had to plan a visit. The museum is in Chawton, a village in Hampshire, England. 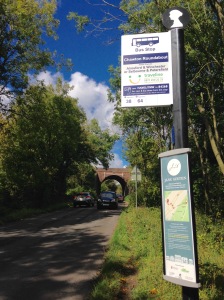 It’s a really simple trip from London as well. There is a direct train from Waterloo to Alton. In Alton, take the 64 bus (towards Winchester) and get off at the Chawton roundabout.

The thing is, you literally get dropped off near a busy roundabout. It caught me off-guard. I really think this bus stop exists solely for Austenites.

From the bus stop it’s a 10 minute walk into Chawton village. It’s worth noting there is a pedestrian “path” (it’s basically a worn down bit of earth, which you can sort of see in my photo) so don’t walk alongside traffic, like yours truly.

The village is really charming, and really tiny. They do not have an ATM so make sure you visit beforehand (I found this out the hard way when I needed cash for the bus to my next destination). It’s really lovely though so I can see why Jane loved living here. 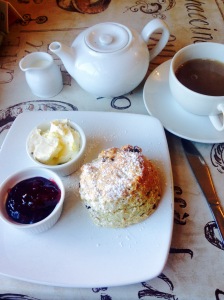 I arrived 30 minutes before the museum opened so I treated myself to a cream tea at Cassandra’s Cup, directly across from it. It’s a really cute place with friendly staff. The scone was still warm and very tasty.

Entrance to the museum is through the gift shop. I already knew I would be browsing the souvenirs. There are loads of Austen things to purchase.

The museum itself is a self-guided experience. Inside the house, there are docents who can answer questions. Also, numerous informational plaques hang in every room. I was, however, a bit disappointed they didn’t offer an audio guide.

To commemorate the 200 year anniversary of her death, the museum put together special exhibits related to objects she owned. 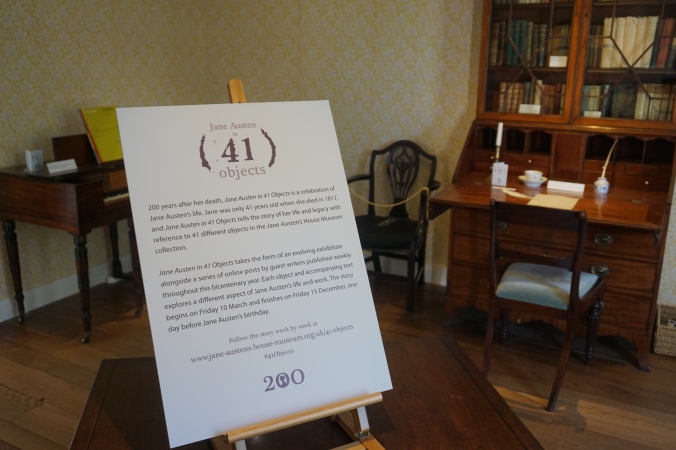 The Drawing Room. The bookcase belonged to Austen’s father.

It’s a small house, but there are loads of things to see and read. I spent approximately two hours wandering around and taking photos. There are loads of historical artifacts and items owned by Austen. The 41 objects exhibition provides even more insight into those possessions. My favourite was the muslin shawl she made–it’s gorgeous. While the gift shop offers reproductions of the gold and turquoise ring Austen owned, it does not have the shawl she made. If they did, I would have certainly bought one. 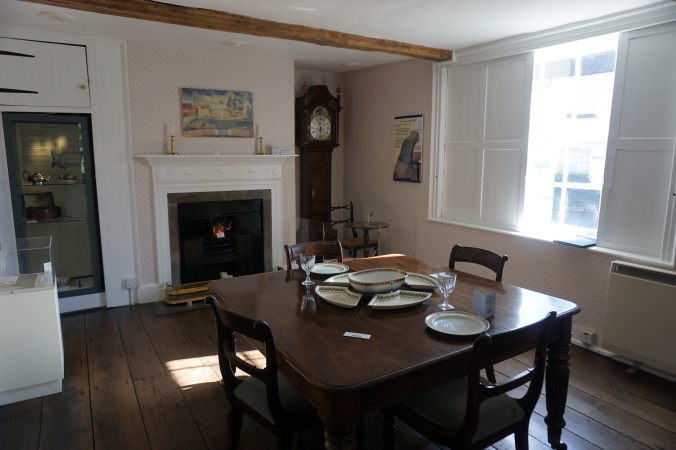 The dining parlour where Austen spent her mornings writing. The table in the corner is her writing table. The top is original, but the base has been replaced.

I met another American woman travelling on her own. We got to chatting about our love for Austen and the awkward roundabout crossing. There were a few other Americans that day. We sure love our Austen. 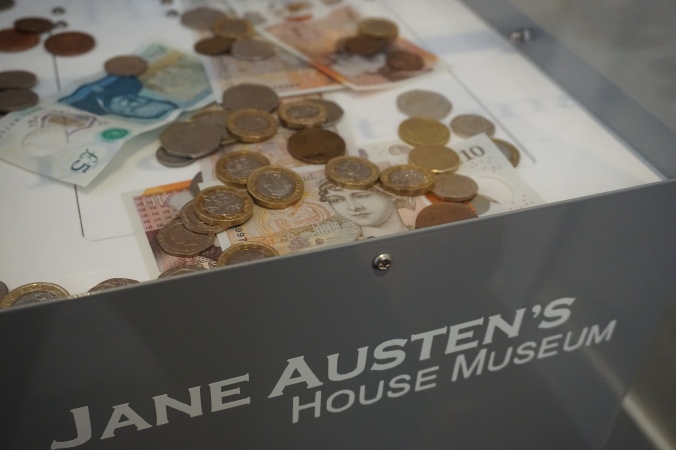 While I did have a fabulous time, I wish the experience incorporated a little more Austen-like quirkiness. This small, but humourous, touch in the garden was perfect. I think they could do with a few more. 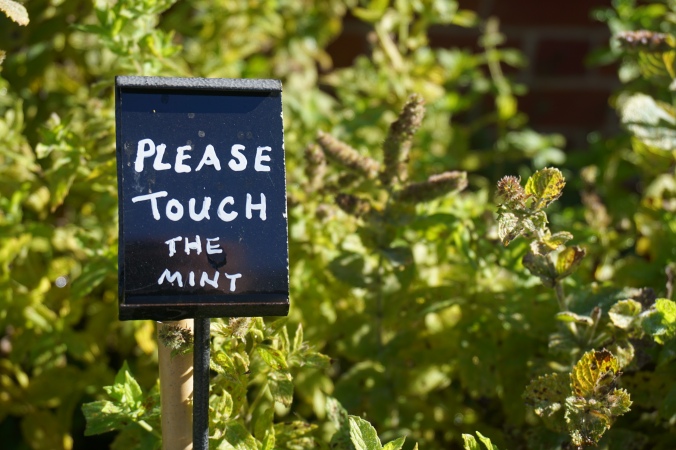 This really tickled me. I felt Austen would approve.

Overall, Austenites will thoroughly enjoy themselves. The visit is absolutely worth it. Before I left, I spent some time in the gift shop and talked myself out of several purchases. It would be easy to lose a hundred pounds in there… 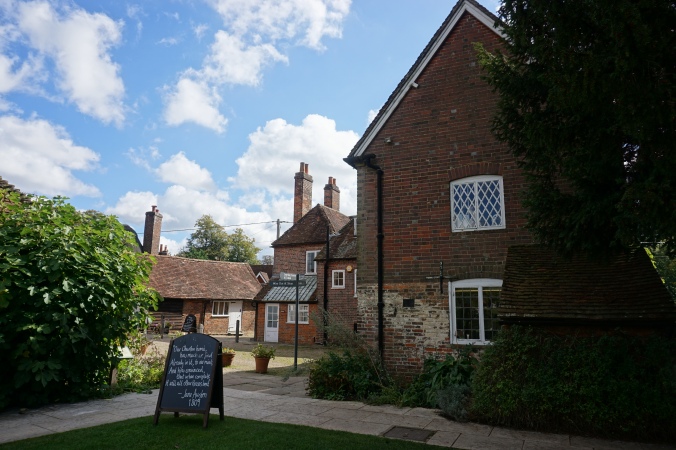 Rear view of the property

But my day didn’t end in Chawton. I decided to take full advantage of my day trip and add a visit to Winchester where Austen is buried. I walked back to the same bus stop–this time I took the pedestrian “path”–to wait for the 64 line. It cost £5.50 and took about an hour. The trip by car or taxi is approximately 30 minutes (according to Google Maps), but a taxi would have cost around £50. The bus it was.

I’ve travelled to a lot of places in England. I even spent the last year living in Norwich. But I instantly liked Winchester. Maybe the blue skies and sunshine had something to do with it. Maybe it was being greeted by King Alfred. 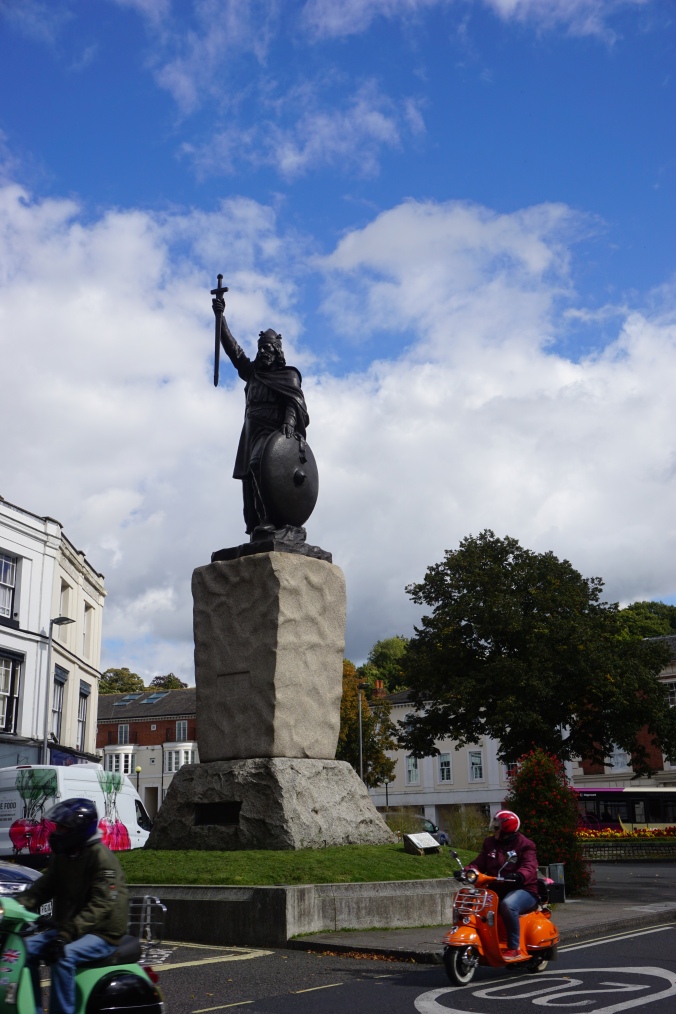 Before going to Winchester Cathedral, I searched for someplace to eat. Initially, I wanted a pub lunch. I’m mildly obsessed with the plowman’s lunch. The tourist centre recommended a couple pubs, which I cross referenced with TripAdvisor. I settled on the Old Vine.

The bar area was crowded, but not massively busy. There were several open tables so I snagged one in the corner. I waited at the bar for awhile and no one acknowledged my presence. I asked one of the girls if I order at the table or at the bar; she said bar then walked away. The whole experience made me feel awkward and unwelcome. They also did not have a ploughman’s. So I politely excused myself.

Instead, decided to revisit the street market I had passed on the way. I think I made the right decision. For half the price of a sandwich at the Old Vine, I got a delicious halloumi pita wrap. Then I purchased a pastel de nata from a nearby vendor. The tart was mediocre, but I’m spoiled from having authentic ones in Lisbon. No food photos exist because I was hungry and forgot.

I ate my lunch outside the cathedral. There were loads of people lounging about on the grass enjoying the sun. While I did a guided tour of the cathedral, I’ll just focus on the Austen part. Read about the Cathedral tour here. 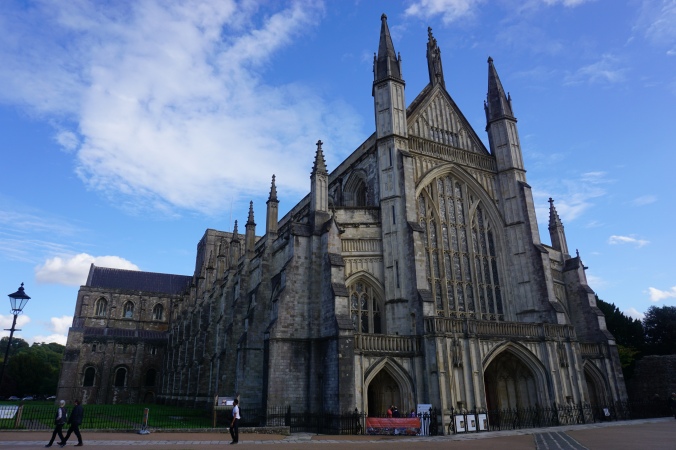 Austen’s failing health forced her to seek treatment from a renowned doctor in Winchester. Sadly, she died a few months later in July 18, 1817. Our guide said Austen was buried inside the cathedral because a relation worked there, even though at the time of her death she was not a famous novelist. 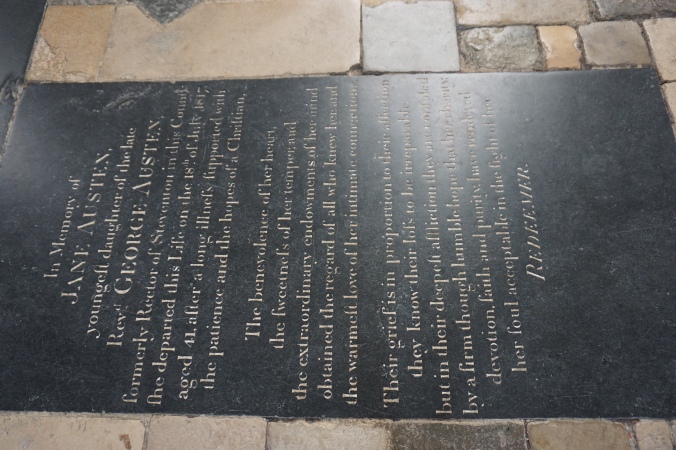 Austen’s gravestone in the north aisle of the nave

After her fame grew, other memorials and tributes followed. 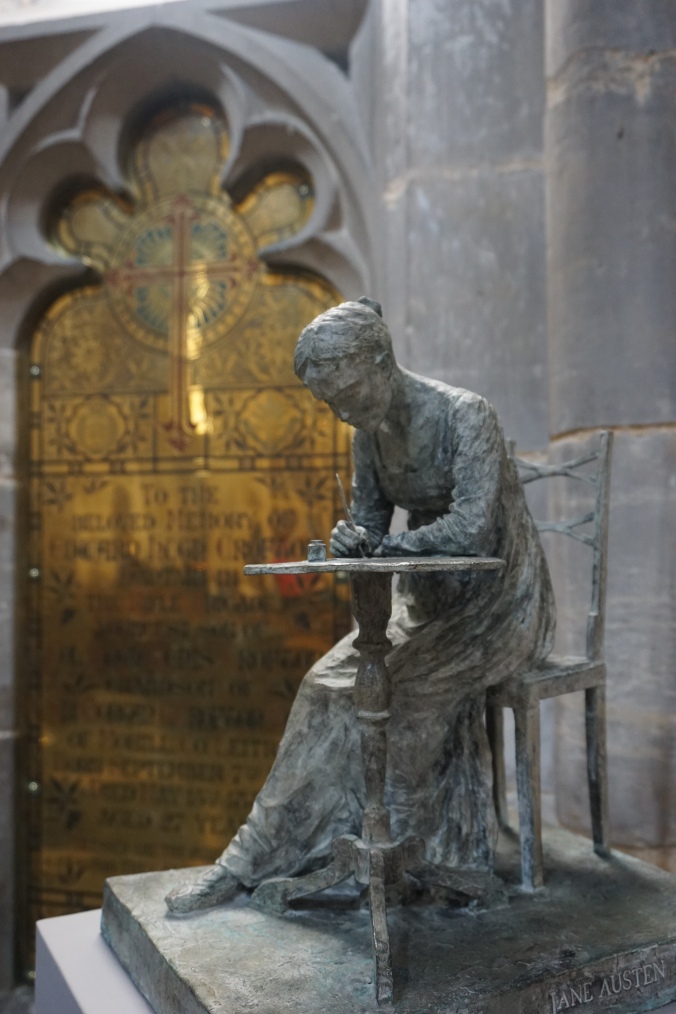 Austen at her writing desk beside the brass plaque erected in 1870 by her nephew, Edward

The interior of the cathedral is stunning and you can spend hours (like I did) inside. The Jane Austen memorials are just one small section of this vast place. 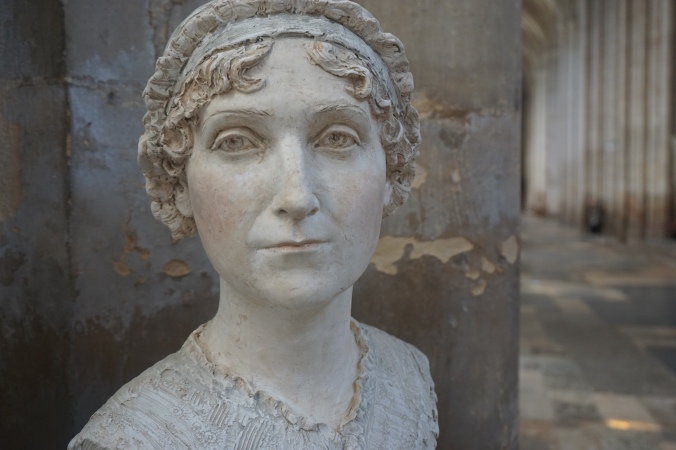 This mural showed up later in the tour. I’m sure it’s Pride and Prejudice, but I didn’t see a plaque. Looking at the photo now, there seems to be something in the bottom right corner. 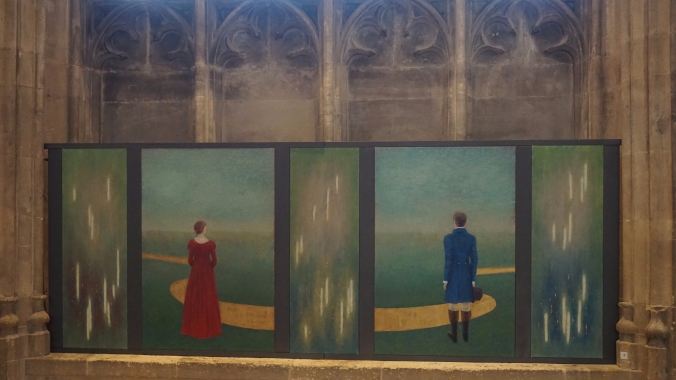 The cathedral giftshop has more Austen souvenirs. I ended up purchasing a leather change purse decorated with the spines of her novels.

Unfortunately, I did not go to the house Jane Austen lived in while in Winchester. It’s a private residence now so there is no access to the public.

If you’re travelling from abroad, I would suggest spending the night in Winchester because there are other things to see. But if you only have a day then a trip to Chawton and Winchester is completely feasible.

Thanks for checking out my blog. Hope you enjoyed reading about my day of Austen adventures, and that it might be useful if you plan your own.

10 thoughts on “My Day of Austen in Hampshire” 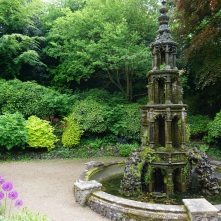 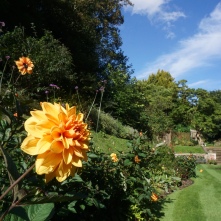 More dahlias because why not (Photo cred: Moles) 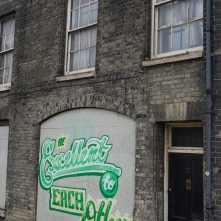 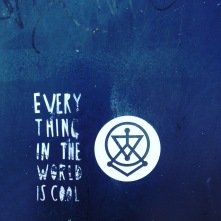 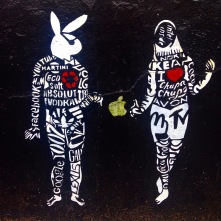 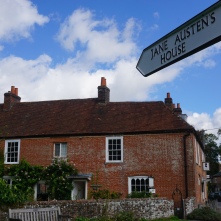 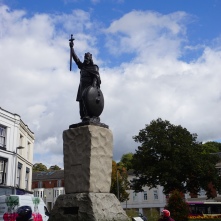 Statue of King Alfred in Winchester 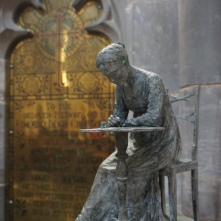 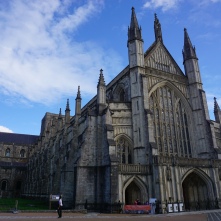 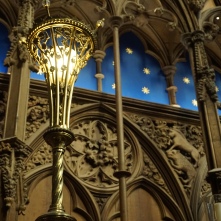 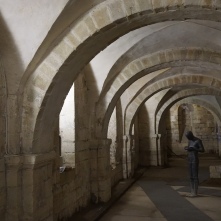 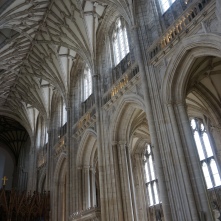 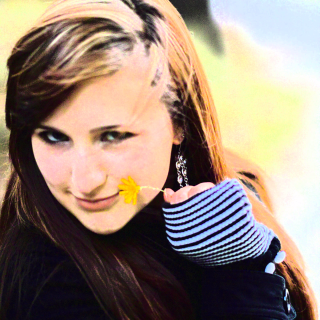 Writer | world traveller | blogger | foodie | lover of feelings and lost causes | Hi there. I'm Jenn. My grandma calls me a gypsy, but I can't help that I love travelling. I'm an introvert (who sometimes masquerades as an extrovert) I like writing, but I dislike writing about myself. Want to get to know me better? Follow this blog or my Twitter, @jomecki :)